This has become a bit of a family standard and I have never yet found the same recipe online - they're all slightly different. The cake is lovely and dense from the soured milk and intensely chocolatey because of the chocolate and cocoa powder. It's from a St Michael (as in M&S) book called something like "Chocolate", making it pretty difficult to Google.

This recipe can definitely take some abuse - we always had Flora at home and never real butter, we weren't big fans of sieving, and we would have used the microwave to melt chocolate. I don't recall if we ever made the praline (I doubt it), certainly I don't remember bothering to split the cake often, let alone to three layers! The icing I think we must have made at some point but since I learnt that ganache is super easy I usually smother it in that instead - a one-to-one weight ratio of dark chocolate to cream - though the less said about my adventures with white chocolate ganache, the better.

The quantity conversion is a bit suspect, everything's rounded to the nearest whole ounce or 25g. I've made this most successfully in grams so I'm inclined to stick with them, though I'm sure we must have followed the Imperial measures at home as that's Mum's habit.

Filling:
150ml / 1/4 pint double cream
1 quantity almond praline (from elsewhere in book - this might be a good substitute) 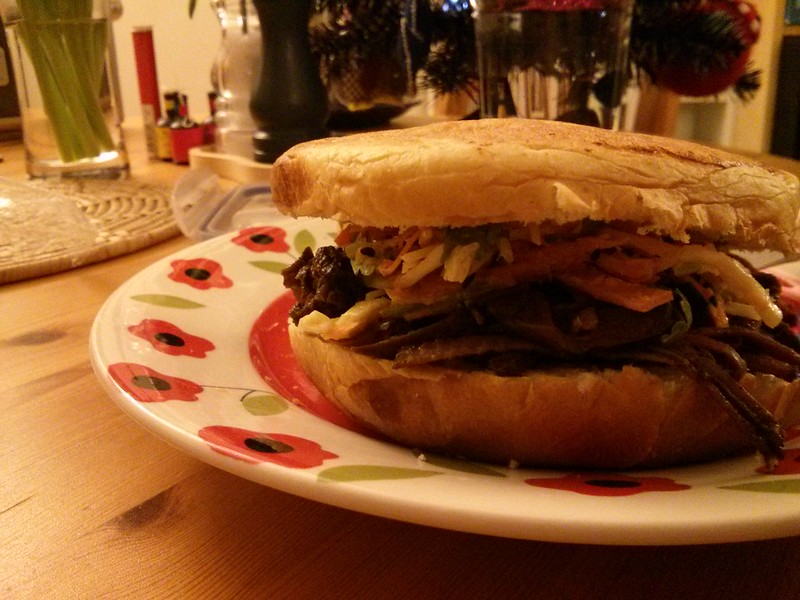 This is essentially my attempt to bring Grillstock home. We may not have the ridiculous barbecue apparatus (or the weather & wood chips for operating it) but we do have a slow cooker and access to CostCo's meat section.
Our beef had a not-so-successful earlier incarnation - after 8 hours of cooking (5 low, 3 high) it was definitely done (by sight and internal temperature) but was nothing like the tender falling-apart texture I was hoping for. We had some for supper anyway and it was pretty tasty with barbecue sauce (if a little tough), but it was the extra 12 hours overnight that turned the remaining beef into what we'd hoped for all along. I can't really give guidance on cooking time but for our 2kg rolled brisket it was definitely more than 8 hours and up to 20.
Tonight we ate the soft beef with leftover slaw on Tesco brioche burger buns. N had some Jack Daniels barbecue sauce on his - I didn't think it needed it as I'd reheated it in the juices/gravy/non-icky-accurate-word so I just added slaw to mine.


Cooking:
We did 5h on low, 3h on high, 1h dinnertime fiddling, 11h on low. Then I removed the beef from the pot and pulled it apart. We stored the beef in one tupperware and the liquid in another. These went in the fridge for ~10h, then we removed the layer of congealed fat from the liquid.

Serving:
For our sandwiches we reheated some beef in some of the liquid in a non-stick pan, then allowed the liquid to reduce to what would stay mostly inside a roll.

Directions:
1. Find a decent sized bowl - we used a 1L pyrex one after the prettier one turned out to be too small
2. Slice cabbage & carrot into small ribbons, preferably using a mandolin. Grating the carrot works but the result can be a bit mushy
3. Slice the coriander finely and put it in the bowl with the carrot and cabbage
4. Sprinkle on the black onion seeds and paprika, stirring about to spread them
5. Add lemon juice and stir
6. Add yoghurt gradually and stir until everything is nicely distributed, add enough to give a thin coating

Please excuse the giant heading  - I've attempted to use standard recipe markup so that Google, Pinterest etc will recognise this as a recipe.
Posted by Dichohecho at 22:59 No comments:

First thing's first - this would probably be a very tasty bowlful without the chorizo and it is easy to omit. However if you are a chorizo fan I hope you will appreciate this very excellent way of cooking it - it seems to stay "juicier" (ew) and more distinct than if it were allowed to sink into the stew.
I don't know what the definition of a chilli is really but spicy stew sounded a bit clumsy so here we are. I've left the ingredients as what I used with notes, some things are definitely not vital e.g. the radish. I also had three somewhat squishy half-frozen baby plum tomatoes which went in but I don't think they made a huge difference to anything.

For the smush:
One avocado
Juice of half a lime
Small bunch of corriander (cilantro) leaves, chopped

Smash all the above together with a fork and a pinch or two of salt. Set aside.
(the lime juice should prevent the avocado from going brown if that's a concern for you)

Grease a shallow ~11.5cm cake tin*.
Combine the dry ingredients in a decent sized bowl, then make a well and gradually stir in the milk followed by the beaten egg. Stir in the corn if using.

Pour the mixture into your prepared tin and scatter rings of green chilli across the surface.
Bake at 230C for 25 minutes until set and golden(er) on top.

This is a bastardised version of this recipe. I made it without the onion once and didn't miss it.
I can confirm that it freezes well, just sprinkle it with water before re-ovening.
* I use an enamelled cast iron tatin dish. Using something metal here helps a crust form underneath, I've not tried ceramic but I imagine longer cooking at a lower temp might be required.

For the White Bean & Chorizo Chilli:

Heat deep pan nice & hot and fry the chorizo slices until they're browning on both sides and have oozed a fair amount of orange fat. Scoop them out and set aside. Now turn the heat down a little and add the onion, garlic, celery, and seeds and allow to soften. Add the peppers, radish, coriander stems, chilli, and chilli paste. Allow all this to soften up until you have a fairly smushy panful with the peppers retaining their structure. Stir in the cinnamon and coriander. Then the tomato paste and beans. Allow all this to cook down for a good while before adding the spinach.
Towards the end incorporate the corriander leaves and the chorizo slices. Make sure this all gets nice and hot together.
Serve the chilli in a pasta bowl with a edge of cornbread and a good splat of the avocado smush.

Posted by Dichohecho at 19:41 No comments:

I can't remember where I found the recipe this is based on but I'm fairly sure it was one I found while trying to use up an enormous glut of courgettes. My Mum grows courgettes and apples so from August until the damn things die off we're inundated with them. Now I live away from my parents the effect on me is lessened but I still get the occasional vegetable delivery.

ABC stands for Apple-Banana-Coconut, which is the version I made for Ceilidh & Warwick's party but this recipe is pretty adaptable:
- I've used courgettes, apples, and carrots individually and in mixtures and they all worked fine.
- Walnuts are the classic choice of nuts but coconut works surprisingly well
- Dried cranberries or other fruit make for a sweeter & more exciting cake
- It's quite easy to turn this vegan as the only non-vegan ingredient is the eggs. I've made it several times successfully using flax eggs - one egg = 1tbsp ground flax (golden linseed) + 3tbsp water.
- I usually use brown sugar for the flavour
- C&W version had ~1/2tsp each of cinnamon, nutmeg, & ginger instead of the 1tsp of cinnamon

Please excuse the giant heading  - I've attempted to use standard recipe markup so that Google, Pinterest etc will recognise this as a recipe.
Posted by Dichohecho at 21:56 No comments:

Email ThisBlogThis!Share to TwitterShare to FacebookShare to Pinterest
Labels: recipe

This is go-to brownie recipe. I picked it out originally as the amounts of butter & sugar are slightly less horrendous than other brownie recipes. If you cook these for the recommended time they'll come out squishy, but cook a bit longer and the result will be cakier. These can also be made in small cake format - bake them as you would fairy cakes and check for done-ness earlier. I often use chunks of chocolate or dried fruit (cranberries especially) instead of nuts. I also go heavy on the cocoa as it really does help the flavour. I've had good results using dark chocolate, milk chocolate, and a mixture of both. 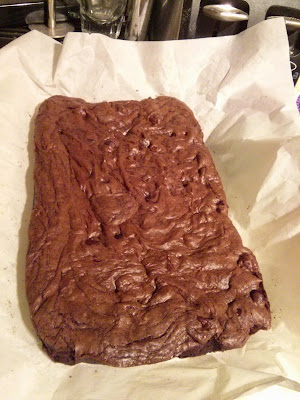 Adapted from a recipe from Coconut & Lime

Directions:
1. Pre-heat oven to 180c / 350F / Gas Mark 4
2. Grease or line (with greaseproof paper) a 9"/22.5cm square tin or equivalent
3. Melt butter, chocolate, & cocoa together (don't microwave the cocoa if using a microwave)
4. Mix flour, nuts, salt, & baking powder together
5. In a large bowl, beat the eggs, sugar, and vanilla together until frothy
6. Add the chocolate mixture to the eggs, stirring as you go
7. Gradually add the dry ingredients and mix until well combined
8. Splodge into the prepared tin and bake for 25-30 minutes. The top should form a crispy shell and a knife inserted should come out clean.

Please excuse the giant heading  - I've attempted to use standard recipe markup so that Google, Pinterest etc will recognise this as a recipe.
Posted by Dichohecho at 21:17 No comments:

Email ThisBlogThis!Share to TwitterShare to FacebookShare to Pinterest
Labels: recipe

Email ThisBlogThis!Share to TwitterShare to FacebookShare to Pinterest
Labels: On A Theme, photos, Southwold

Long time no post, I've been using Tumblr for my photoblogging needs. It's seductively simple to post a photo from my Flickr on there. Sorry Blogger.
This is cross-posted from there, it's a collection of photos of one of my favourite places in Bristol, St Nicholas Markets.

Dichohecho
I'm Sarah and & I'm getting used to calling myself a software engineer. I can usually be found in Bristol. I like taking photos, crocheting & being on trains.